Both the Amco Swing-A-Way Jar Opener and the Brix Jarkey Jar Opener are great Jar Openers for people that are willing to spend around $8; it's impossible to go wrong with either option.

The Amco Swing-A-Way Jar Opener was loved by reviewers at America's Test Kitchen, a highly trusted source that performs reliable in-depth testing. It did great in its "Jar Openers" roundup where it was named its "Top Pick", which, in itself, makes it a product worth considering.

As for the Brix Jarkey Jar Opener - it was really well-received by reviewers at America's Test Kitchen, a great source that's known for conducting high-quality in-depth testing. It performed great in its "Jar Openers" roundup and was named its "Ranked 2 out of 7", which, on its own, makes it a product that warrants a closer look.

As a last step, we wanted to do a head-to-head Amco Swing-A-Way Jar Opener vs. Brix Jarkey Jar Opener comparison of their review performance but, unfortunately, weren't able to find any review ratings on either product. 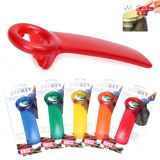 r/AskReddit
in "What simple “life hack” should everyone know?"
Last updated: 20 Aug 2020

r/trippinthroughtime
in "She put the suffer in suffrage"
Last updated: 5 Oct 2019

r/TwoXChromosomes
in "Has anyone ever wrestled with guys and be surprised just how much stronger they are?"
Last updated: 8 Feb 2020

r/AskWomen
in "People with disabilities - what "mainstream" objects/technologies do you use in a way that able bodied people might not expect?"
Last updated: 17 Jan 2019
See morefewer
Reddit Threads (4)

r/TwoXChromosomes
in "Has anyone ever wrestled with guys and be surprised just how much stronger they are?"
Last updated: 8 Feb 2020

Runner Up
in “Jar Openers”