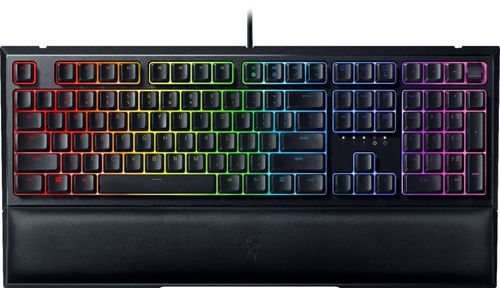 The Razer Ornata v2 is a great Wired Keyboard for its $89 asking price.

The Drop CTRL (2018), however, while a reasonable product for $220, doesn't stack up against its competitors quite as well. If you're considering Wired Keyboards in the $200 range, you might want to check out some better options.

The Razer Ornata v2 got praised by PCmag and Rtings - two highly trusted sources that perform in-depth hands-on testing. It was awarded the "Best for Fans of a Classic Razer Design" title from PCmag and "Best Non-Mechanical Gaming Keyboard Under $100" from Rtings in their respective Wired Keyboard roundups.

Returning to the Drop CTRL (2018), it managed to impress reviewers from two sources that are considered to be some of the most highly trusted on the internet, thanks to their in-depth hands-on testing - Laptop Mag and Wirecutter (NYTimes). It performed great in their respective Wired Keyboard roundups - it was named "Best customization in a snap" by Laptop Mag and "Other great mechanical keyboards" by Wirecutter (NYTimes). That's quite an endorsement, especially coming from such high-quality sources.

We first examined which sources rated each of these best and found that the Razer Ornata v2 got its highest, 8, rating from Techradar, while the Drop CTRL (2018) earned its best, 7, score from Tom's Guide.

Lastly, we averaged out all of their review ratings and observed that the Razer Ornata v2, with its 7.5 average, performed considerably better than most Wired Keyboards - the mean score for the product category being 7.4 out of 10 - while the Drop CTRL (2018) managed an average of 7.0.

There's one caveat here - it might not be entirely justifiable to do a direct Razer Ornata v2 vs. Drop CTRL (2018) review average comparison since they aren't priced the same and more expensive products tend to get higher review scores from some sources.

Runner Up
in “Best gaming keyboard 2020: The best mechanical and membrane keyboards for any budget”
Last updated: 9 Dec 2020

Trusted Source
Depth of
analysis
Yes
In-house
Testing
Reviewed is a website that provides its readers with objective, trustworthy reviews. It extensively tests the performance of products under controlled laborato...
Ranked #5 out of 7
in “The Best Gaming Keyboards of 2021”
Last updated: a month ago
Highly recommended by trusted experts