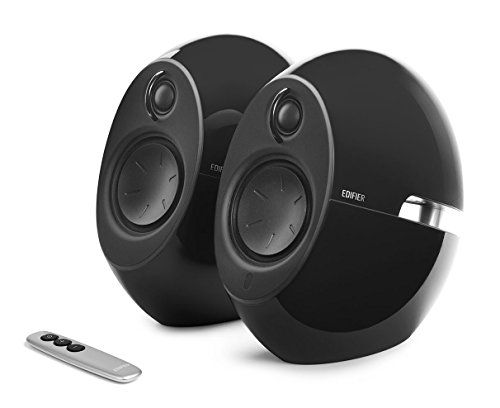 Both options make for good, if unremarkable, Computer Speakers at the $170 budget range. While they should serve reasonably well, you might want to look into some other options at that price point.

If you're still interested in learning more about the Harman Kardon SoundSticks III and Edifier e25HD Luna Eclipse HD (2015), however, we wrote-up what we know about them:

While the Harman Kardon SoundSticks III wasn't able to make it to the very top of any roundups from sources that perform quality hands-on testing, it still got featured in a large number of them. Head-fi, CNET, Android Authority, Techradar, Tom's Guide, Wirecutter (NYTimes), and Gear Patrol have all deemed it worthy of a place on their respective shortlists.

As for the Edifier e25HD Luna Eclipse HD (2015) - Techradar, a source that conducts reliable hands-on testing, has featured it in its Edifier Luna HD review roundup. However, it didn't make it to any of the top spots.

Next, we took a look at which sources liked them best and found that the Harman Kardon SoundSticks III most impressed the reviewers at Gadget Review, who gave it a score of 9.1, whereas the Edifier e25HD Luna Eclipse HD (2015) did best in its TechHive review - it scored 9 points.

Finally, we also compared their review scores to the rest of their competition - the Harman Kardon SoundSticks III earned an average review score of 8.6 out of 10 points and the Edifier e25HD Luna Eclipse HD (2015) received an average of 8.5, compared to the 7.7 average of Computer Speakers in general.