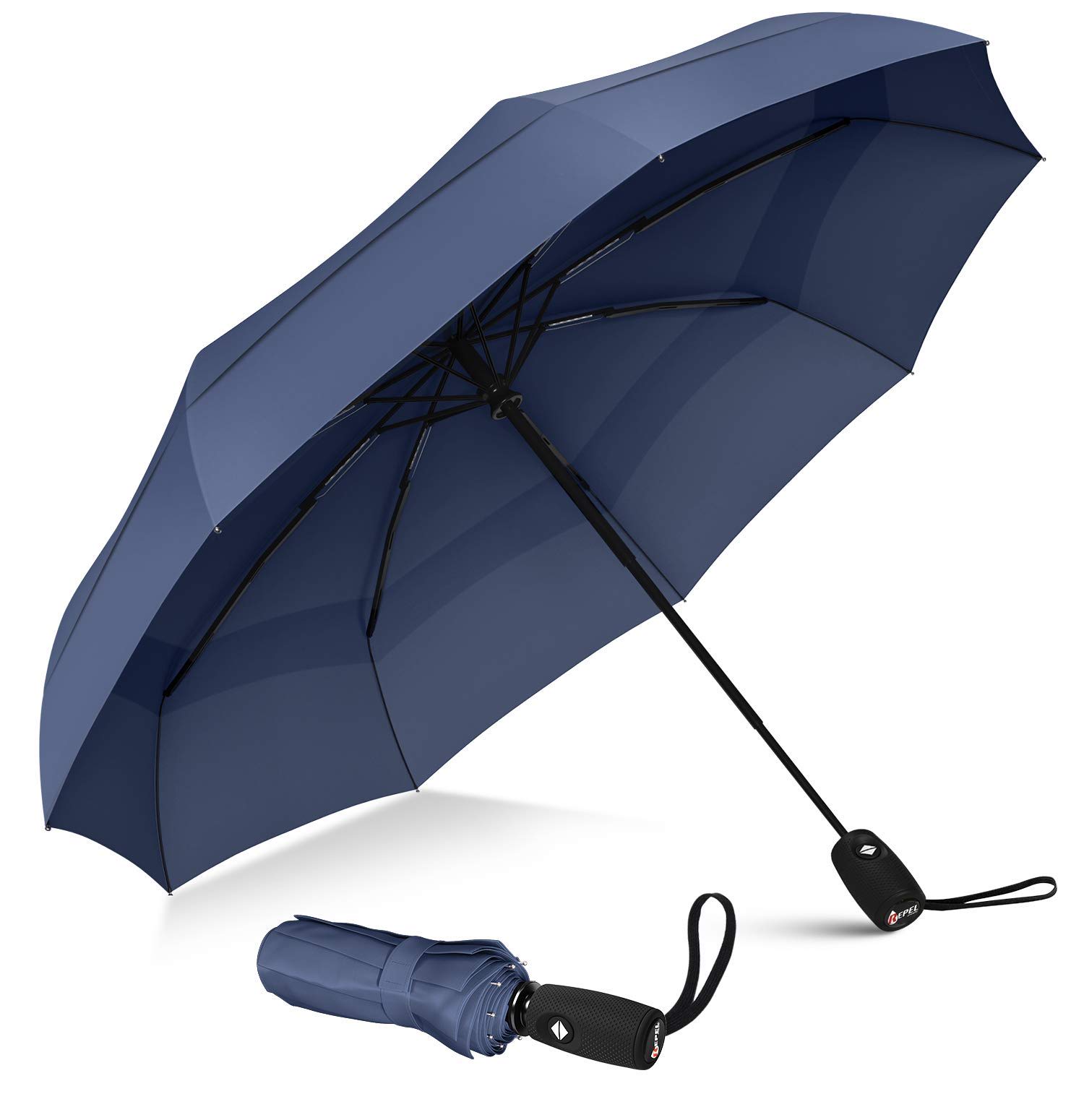 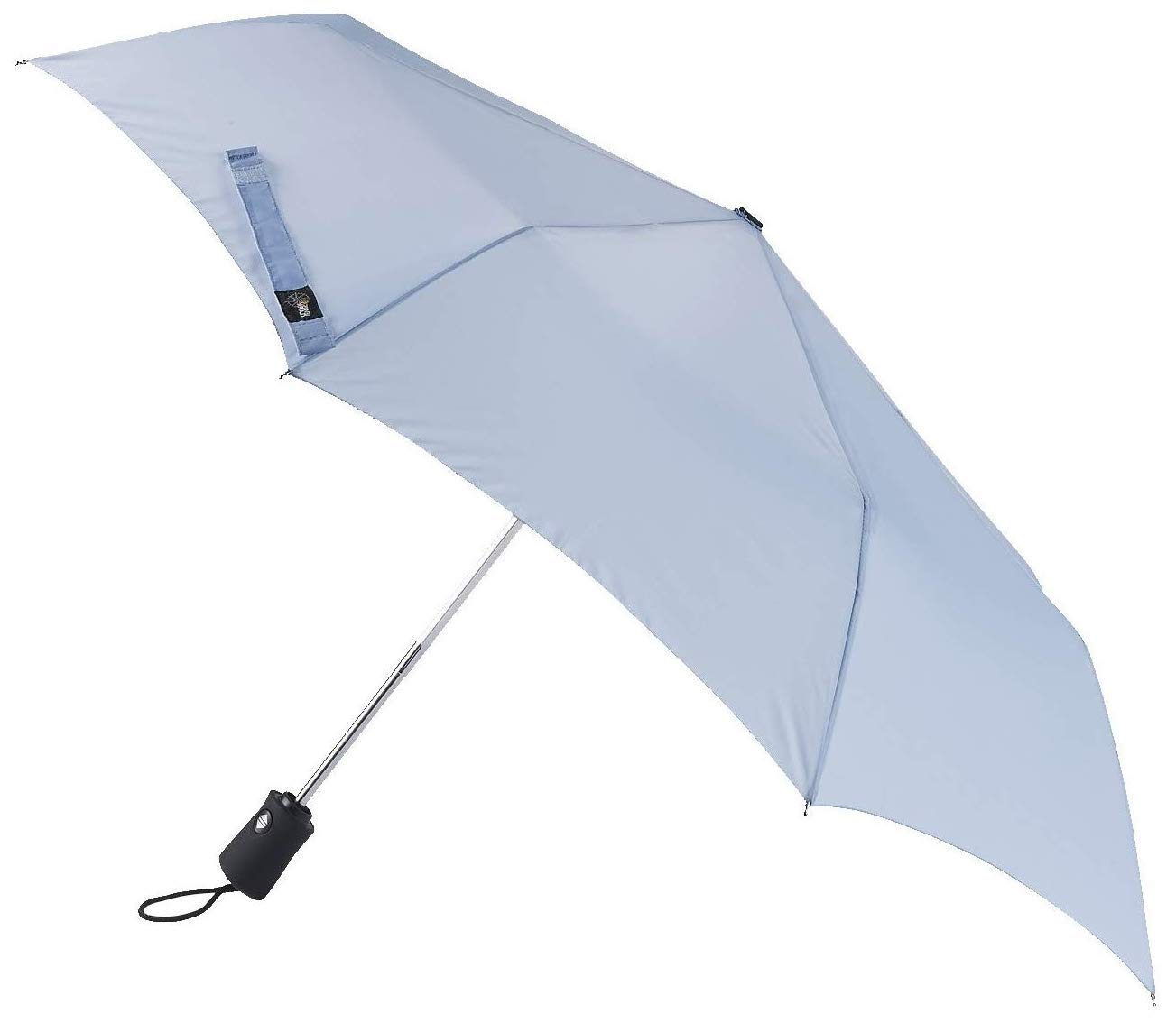 The Repel Easy Touch Umbrella is one of the very best Umbrellas that one can get for around $25. The Lewis N. Clark Travel Umbrella, however, while a very good choice at its $20 price point, falls just short of being remarkable.

The Repel Easy Touch Umbrella has managed to impress reviewers from some of the most highly trusted sources on the internet, including Wirecutter and OutdoorGearLab. It performed great in their in-depth hands-on roundups - it was awarded the "Top Pick" title by Wirecutter and "BEST WEATHERPROOF UMBRELLA" by Good Housekeeping in their respective Umbrella roundups. That's high praise, especially when coming from such high-quality sources.

As for the Lewis N. Clark Travel Umbrella, it was really well-received by reviewers at Wirecutter, a reliable source that's known for conducting its own, high-quality, in-depth testing. It performed great in its "The Best Umbrella" roundup and was named its "Budget pick", which, on its own, makes it a product that warrants a closer look.

When we thoroughly analyzed their review scores, we learned that all of the sources that tested both Umbrellas, including OutdoorGearLab, preferred the Repel Easy Touch Umbrella over the Lewis N. Clark Travel Umbrella.

We also took a look at which sources they managed to impress the most. The Repel Easy Touch Umbrella was liked best by OutdoorGearLab, which gave it a score of 7.1, while the Lewis N. Clark Travel Umbrella got its highest, 6.9, score from OutdoorGearLab.

Lastly, we averaged out all of the reviews scores that we could find on these two products and compared them to other Umbrellas on the market. We learned that both of them performed far better than most of their competitors - the overall review average earned by Umbrellas being 5.9 out of 10, whereas the Repel Easy Touch Umbrella and Lewis N. Clark Travel Umbrella managed averages of 7.1 and 6.9 points, respectively.

Due to the difference in their prices, however, it's important to keep in mind that a direct Repel Easy Touch Umbrella vs. Lewis N. Clark Travel Umbrella comparison might not be entirely fair - some sources don't take value for money into account when assigning their scores and therefore have a tendency to rate more premium products better. r/BuyItForLife
in "I lost the umbrella I’ve had for years and heard they’ve gone downhill since the one I bought. Does anyone have good, long-lasting umbrella recommendations?"
Last updated: 5 May 2019

r/BuyItForLife
in "Guys, do you know any umbrellas that would last a lifetime?"
Last updated: 8 Dec 2018

r/askTO
in "For the 4th time this year, my umbrella snapped in half within a minute of stepping outside. Is there a Toronto tolerant umbrella that I don't know about?"
Last updated: 11 Sep 2018

r/singapore
in "Working men of r/sg, what do you guys carry to work and what’s in it?"
Last updated: 3 Mar 2019
Higher than average expert review score
6.0
Overall Avg. for Umbrellas
7.1
Avg. Review Score
Score

Best Overall
in “The Best Umbrella”
Last updated: 15 days ago

Highly Trusted Source
Depth of
analysis
Yes
In-house
Testing
OutdoorGearLab is one of the most highly trusted sources on everything related to outdoor activities. The site utilizes a very transparent and scientific appro...
Rated 7.1 out of 10
in “The Best Umbrellas”
Last updated: 1 Oct 2019

Best Overall
in “The 9 Best Umbrellas You Can Buy on Amazon, According to Satisfied Reviewers”
Last updated: 15 Apr 2019

Trusted Source
Depth of
analysis
Yes
In-house
Testing
Reviewed is a website that provides its readers with objective, trustworthy reviews. It extensively tests the performance of products under controlled laborato...
Ranked #7 out of 11
in “The Best Umbrellas of 2020”
Last updated: 18 Dec 2019

Runner Up
in “Best Umbrellas”
Last updated: 4 days ago
nytimes.com
-
Depth of
analysis
No
In-house
Testing

Best Overall
in “The Best Umbrella”
Last updated: 15 days ago

Best Overall
in “Best Umbrellas in 2020 (May Reviews)”

Rated 9.1 out of 10
in “Our Best Umbrellas Reviewed and Fully Compared”
nytimes.com
-
Depth of
analysis
No
In-house
Testing

Budget pick
in “The Best Umbrella”
Last updated: 15 days ago

Highly Trusted Source
Depth of
analysis
Yes
In-house
Testing
OutdoorGearLab is one of the most highly trusted sources on everything related to outdoor activities. The site utilizes a very transparent and scientific appro...
Rated 6.9 out of 10
in “The Best Umbrellas”
Last updated: 1 Oct 2019

Budget pick
in “The Best Umbrella”
Last updated: 15 days ago