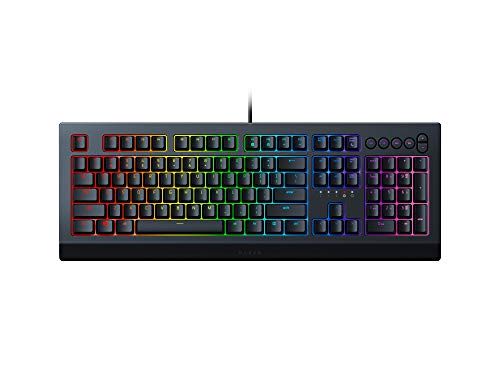 Both the Razer Cynosa v2 and the Logitech K800 (2010) are great Wired Keyboards for people that are willing to spend around $40; it's impossible to go wrong with either option.

The Razer Cynosa v2 has done great in quite a few roundups from some of the most highly trusted sources available, such as TechGearLab, Tom's Guide, and CNET, which perform high-quality in-depth testing. It got awarded the "Best Bang for Your Buck" title by TechGearLab, "The best budget gaming keyboard" by Tom's Guide, and "Ranked 2 out of 8" by CNET in their respective roundups. Earning that much praise from such respected sources is undoubtedly an impressive accomplishment.

Taking a look at the Logitech K800 (2010), we found it was well-received by reviewers from a couple of reliable sources that conduct their own hands-on testing, including PCWorld, Windows Central, TechSpot, and Tom's Guide. It performed great in their Wired Keyboard roundups - it managed to earn the "Best overall wireless desktop keyboard " title from PCWorld, "Best Wireless for Windows" from Windows Central, and "Best Wireless Keyboard" from TechSpot, which is a notable accomplishment.

We tried doing a direct Razer Cynosa v2 vs. Logitech K800 (2010) review score comparison but couldn't find any sources that tested both.

Next, we took a look at which sources liked them best and found that the Razer Cynosa v2 most impressed the reviewers at Techradar, who gave it a score of 8, whereas the Logitech K800 (2010) did best in its CNET review - it scored 7.7 points.

r/pcmasterrace
in "Newbie to it all looking at Keyboards"
Last updated: 26 Jul 2020
Reddit Threads (7)