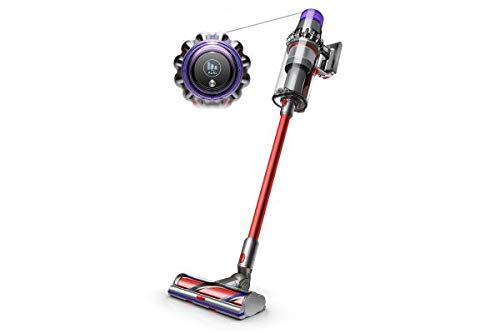 The Dyson V11 Outsize is a relatively good Cordless Stick Vacuum Cleaner for people that are willing to spend around $710. The Roborock H6, by contrast, is quite unremarkable and doesn't stand out in any meaningful way from other products at this price point.

In both cases, however, we recommend that you take look at some other options at the $710 and $320 budget ranges; in all likelihood you'll find some better alternatives.

If you're still interested in learning more about the Dyson V11 Outsize and Roborock H6, however, we wrote a summary of what we know about them:

The Dyson V11 Outsize impressed reviewers from a large number of trusted sources that conduct reliable hands-on testing, including Techradar, Popular Mechanics, The Spruce, Expert Reviews, and Reviewed. It performed great in their respective roundups - it was named "The best cordless vacuum for large homes" by Techradar, "Best Splurge" by Popular Mechanics, and "Best for Carpet" by The Spruce. Earning that much praise from such reliable sources is a good sign that the product is worth the money.

When we thoroughly analyzed their review scores, we learned that all of the sources that tested both Cordless Stick Vacuum Cleaners, including Modern Castle, preferred the Dyson V11 Outsize over the Roborock H6.

We also took a look at which sources they managed to impress the most. The Dyson V11 Outsize was liked best by TrustedReviews, which gave it a score of 10, while the Roborock H6 got its highest, 10, score from vacuumsguide.com.

Lastly, we averaged out all of the reviews scores that we could find on these two products and compared them to other Cordless Stick Vacuum Cleaners on the market. We learned that both of them performed far better than most of their competitors - the overall review average earned by Cordless Stick Vacuum Cleaners being 8.0 out of 10, whereas the Dyson V11 Outsize and Roborock H6 managed averages of 9.2 and 9.0 points, respectively.

Due to the difference in their prices, however, it's important to keep in mind that a direct Dyson V11 Outsize vs. Roborock H6 comparison might not be entirely fair - some sources don't take value for money into account when assigning their scores and therefore have a tendency to rate more premium products better.

r/greatpyrenees
in "Someone found the loophole to not being allowed to stand on the robot vac..."
Last updated: 22 Jan 2021

Runner Up
in “Best cordless vacuum cleaner 2021: Which is the best handheld vacuum for you?”
Last updated: 31 Aug 2021

Best Splurge
in “The Best 8 Dyson Vacuums for Every Home and Surface”
Last updated: 28 Sep 2021

Trusted Source
Depth of
analysis
Yes
In-house
Testing
Reviewed is a website that provides its readers with objective, trustworthy reviews. It extensively tests the performance of products under controlled laborato...
Mentioned
in “The Best Dyson Vacuums of 2021”
Last updated: 16 Sep 2021

Runner Up
in “The 10 Best Vacuums for Small Apartments at Every Price Point”
Last updated: 30 Apr 2021

Best cordless stick vac for featherweights
in “Best cordless vacuum cleaner 2021 with stick vacs for every budget”
Last updated: 11 days ago
buzzfeed.com
-
Depth of
analysis
No
In-house
Testing
Ranked #5 out of 31
in “31 Gifts From Target That Will Make Basically Everyone Happy”
Last updated: 2 Mar 2021