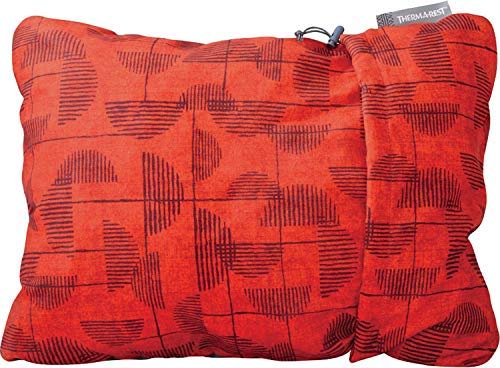 The Therm-a-Rest Compressible Travel Pillow is widely considered to be a great Travel Pillow at its $25 budget. The trtl travel pillow plus, however, while also a good product at this price point, doesn't stack up against its competitors quite as well.

The Therm-a-Rest Compressible Travel Pillow has impressed reviewers from two sources that are among the most highly trusted on the internet, namely Wirecutter (NYTimes) and OutdoorGearLab. It did great in their objective hands-on roundups - it earned the "Top Pick" and "Best Bang for the Buck" awards from Wirecutter (NYTimes) and OutdoorGearLab, respectively. That's high praise from such reputable sources.

As for the trtl travel pillow plus - it impressed reviewers at The Independent, a trustworthy source that conducts solid hands-on testing. It did great in its "9 best travel pillows that give support while snoozing on the go" roundup - in fact, it earned its "Ranked 2 out of 9" title, which, on its own, indicates a certain level of quality.

r/CampingGear
in "Any side sleepers have recommendations as far as getting a better night of sleep while camping?"
Last updated: 30 Oct 2018

r/onebag
in "What travel pillow would you recommend for long-haul flights?"
Last updated: 29 Nov 2019

OutdoorGearLab
9.0
Has no expert reviews
—
No Data
Highly recommended by trusted experts

Runner Up
in “Best camping pillows 2021: Sleep better in the great outdoors”
Last updated: 23 days ago

Best travel pillow for camping
in “The Best Travel Pillows on Amazon, According to Hyperenthusiastic Reviewers”
Last updated: 4 Feb 2020

Runner Up
in “9 best travel pillows that give support while snoozing on the go”
Last updated: 8 Sep 2020