14 1
Review of Netgear Orbi powered by the Slant community.

The Netgear Orbi is a mesh WiFi sytem that is easy to set up and delivers great performance. The Netgear Orbi uses a router and an add-on satellite unit, which works as a wireless extender for the Orbi router. It’s essentially two routers in one, with the second unit acting like a glorified Wi-Fi extender. 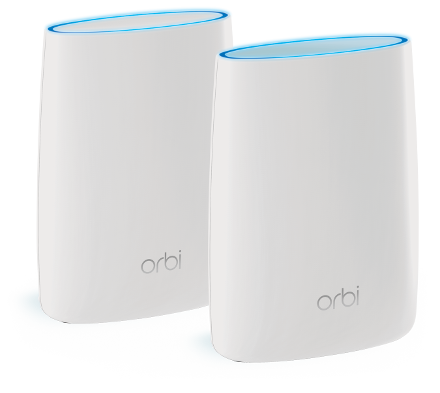 #6
What are the best wireless routers?

This tri-band AC3000 device can deliver theoretical throughput speeds of 1,266Mbps (400Mbps on the 2.4GHz band and 866Mbps on the 5GHz band). Third 5GHz band can reach maximum speeds of 1,733Mbps. In real life testing the Orbi router turns in a score of 480Mbps, and the satellite delivers 470Mbps. At a distance of 30 feet, the Orbi router scores 223Mbps, and the satellite scores 220Mbps.
To maximize routers performance Orbi uses a separate 5GHz band that’s used only for communications between the router and the satellite. In comparison, other Wi-Fi extenders use the same bands to extend signal, which results in a 50% signal loss each time the signal is wirelessly extended.

Setting up the Orbi is very easy. All you need to do is to turn on the main router, download the Orbi app, and follow few simple steps. Then you need to find a place for satellite where you can get best possible coverage. Connection between main router and satellite will be done automatically.

If you find out that a pair of two is not sufficient, you will be paying a lot more for 1 extra satellite.

Orbi Home WiFi System is available for just under $400. It includes a router and an extender which will cover 4,000 square feet. However if this isn’t enough for you and you need better coverage, you can get a third device for an extra $250, which makes it a total of $650.