5 0
Review of King of Tokyo powered by the Slant community.

King of Tokyo is a dice rolling game for 2 – 6 players. Players take on the roles of giant monsters battling each other to become the king of Tokyo. On their turn the players roll six special dice three times that let them receive 1, 2, or 3 victory points, attack other monsters, gain energy to spend on ability cards, or heal up. The game is won by the last monster standing or the first monster to reach 20 victory points. 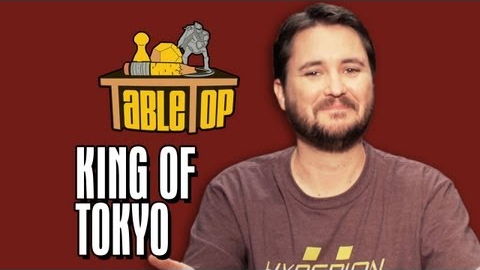 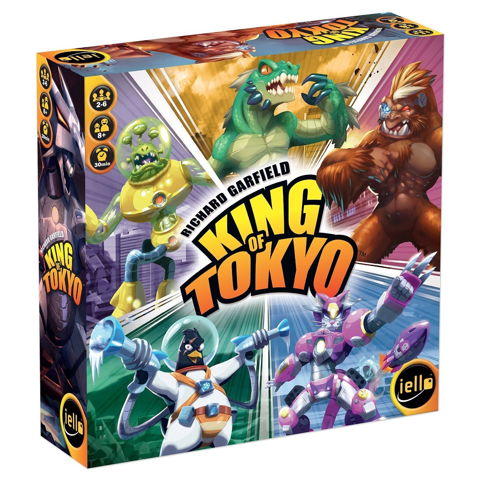 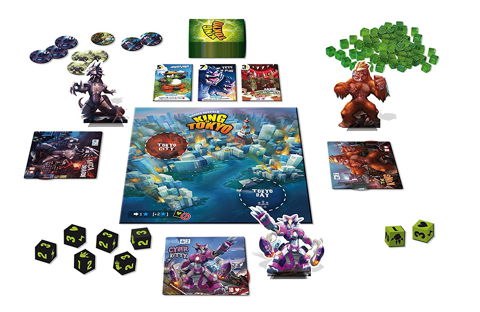 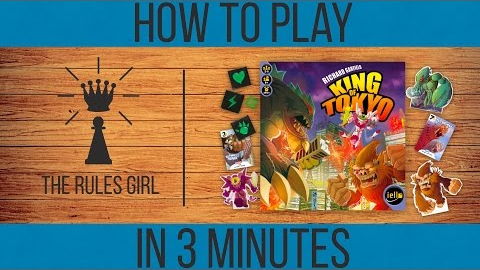 The game’s whacky theme of different monsters battling it out in the city of Tokyo gives the game a silly and light-hearted feel that the players easily take over. There’s constant engagement between the players, be it trash talk, begging for mercy while in Tokyo, anger or delight for dice rolls, or persuading others to gang up on someone.

King of Tokyo features some unique monster-y artwork, sort of parodying the movie cliché of huge beasts destroying urban environments. Everything is very colorful, cartoony, and highly detailed, from the box itself to the cardboard cutout monsters, the ability cards, and the gameboard with a burning Tokyo in the background.

The base game includes six different playable monsters and their matching cardboard cutouts and player boards. These monster boards are of great quality, feature the same wonderful artwork as the whole game, and are nicely designed. There are two spinable parts that show the monster’s health and victory points, so it’s a very easy way to keep track of what is happening.

King of Tokyo is highly accessible to people of all ages because it’s very easy to learn but it still provides enough room for strategy because of the “being in Tokyo” part. The whole game revolves around rolling dice and trying to either reach 20 victory points or destroy everyone and everything.

On your turn you roll six dice. With the dice you can receive 1, 2, or 3 victory points (if you roll three of the same number), attack other monsters by rolling the attack icon, receive energy for ability card purchases, or heal yourself. After you’ve rolled you can re-roll any amount of dice two more times.

Apart from the wonderful monster boards, the rest of the components have quite a few drawbacks. The special dice are large, so it’s very uncomfortable to throw six of them, especially if you have smaller hands. The energy tokens are small, dark green cubes that can easily be displaced with a small shake of the playing surface or lost if they drop down on the ground. The cardboard monsters and ability cards show wear quite quickly.

Lastly, the only purpose the gameboard serves is to have two spaces that represent being in Tokyo. This function could just as easily be replaced by just putting a monster in the middle of the table, making the gameboard purely aesthetic and otherwise useless.

As soon as a monster reaches 0 health it’s out, so you’re going to have to sit and watch the remainder of the game if that happens to you.

The first edition of King of Tokyo costs $62, which is two times more than the newer edition, though the only differences between them are in the artwork and in one very minimal rule change about entering Tokyo – you don’t need to roll a claw, you enter straightaway. A lot of people prefer the first edition’s artwork.

King of Tokyo has a few quite overpowered ability cards. If a player pulls off a specific combination, then they might be unstoppable and create a long, drawn-out and frustrating game until they finally win. For example, the wings card lets you cancel all damage if you have more than two energy. This basically means that you can keep evading hits and just stack up on victory points. Some players recommend removing a few cards from the game for a better experience.

Since King of Tokyo is a dice rolling game, it should be no surprise that pretty much all of it revolves around getting lucky with your rolls, so if you’re not a fan of that then this isn’t the game for you. The game tries mitigating the randomness a little bit by having the re-roll mechanic and ability cards in play, but there are still plenty of opportunities to come back from crushing defeats or drop down from being in the lead.