607 98
Review of Puppy Linux powered by the Slant community.

Read What Is Puppy Linux? Everything You Need to Know. 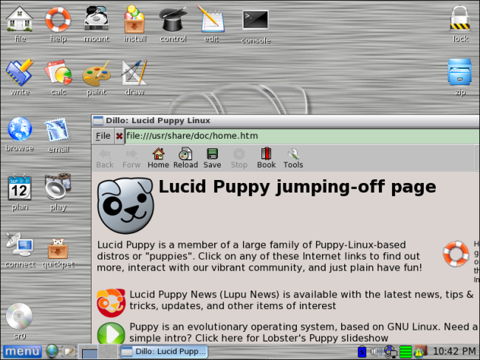 Puppy Linux requires 128MB of RAM and 333Mhz of CPU, although 256MB of RAM is recommended.

Pro
The whole OS runs off of RAM

Since Puppy Linux is completely loaded and run off of RAM instead of HDD, it's read/write speed is not a factor.

Pro
Designed to run as a live USB/CD

A portable version, that can be carried on a thumb drive without requiring installation, weighs less than 100MB; a Live CD - less than 150MB. You can even save your settings and files for Puppy on the external device/media.

Running off a live CD also has security benefits, as your system will reset to the known config after each boot.

The first is an Ubuntu based release called Tahrpup, by using this version the user is able to take advantage of all software and support from Ubuntu.

The second version is called Slacko, which is built upon the Slackware binaries.

The third is called Wary and it is built to support older hardware than the rest.

And the fourth is called Quirky, which is used as a base to explore new ideas.

Pro
It can be the only distro that works

Sometimes, Puppy Linux is the only distro that works on an old machine: all other distros are more demanding.

JWM is a low resource window manager that is used in most Puppy Linux installs.

Using puppy makes you feel like you just jumped 20 years into the past. Being that the purpose of Puppy Linux is to run or really low resource machines the software used is often on the older side, which is precisely why it has a 20 year old look.

Con
Not as light as it used to be

You can barely find any precompiled packages for Puppy.

Con
No built in compositing

Being a low resource distro there is zero built in compositing for the JWM window manager. Though one can be added through a bit of work.