What are the best scripting languages for writing shell scripts?

+18
24
User
Recs.
38
Updates
16 days
Last
Updated
Here’s the Deal
Slant is powered by a community that helps you make informed decisions. Tell us what you’re passionate about to get your personalized feed and help others.
Related Questions
Activity
13 Options 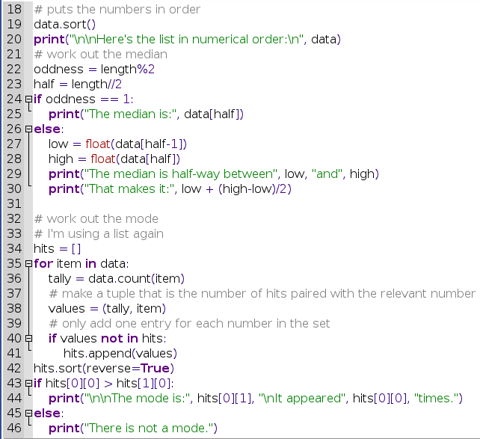 The Python community has put a lot of work into creating excellent documentation filled with plain english describing functionality. Contrast this with other languages, such as Java, where documentation often contains a dry enumeration of the API.

As a random example, consider GUI toolkit documentation - the tkinter documentation reads almost like a blog article, answering questions such as 'How do I...', whereas Java's Swing documentation contains dry descriptions that effectively reiterate the implementation code. On top of this, most functions contain 'Doc Strings', which mean that documentation is often immediately available, without even the need to search the internet.

Python's syntax is very clear and readable, making it excellent for beginners. The lack of extra characters like semicolons and curly braces reduces distractions, letting beginners focus on the meaning of the code. Significant whitespace also means that all code is properly and consistently indented.

The language also uses natural english words such as 'and' and 'or', meaning that beginners need to learn fewer obscure symbols. On top of this, Python's dynamic type system means that code isn't cluttered with type information, which would further distract beginners from what the code is doing.

Installs and works on every major operating systems if not already installed by default (Linux, macOS).

Python ships with a large standard library, including modules for everything from writing graphical applications, running servers, and doing unit testing. This means that beginners won't need to spend time searching for tools and libraries just to get started on their projects.

Python's popularity and beginner friendliness has led to a wealth of tutorials and example code on the internet. This means that when beginners have questions, they're very likely to be able to find an answer on their own just by searching. This is a huge advantage even over languages specifically designed for beginners, which often lack in tutorials, examples, and other resources due to their lack of professional use.

All three styles can be seamlessly interchanged and can be learnt in harmony in Python rather than being forced into one point of view.

Pro
Easy to get started

On top of the wealth of tutorials and documentation, and the fact that it ships with a sizeable standard library, Python also ships with both an IDE (Integrated Development Environment: A graphical environment for editing running and debugging your code); as well as a text-based live interpreter. Both help users to get started trying out code immediately, and give users immediate feedback that aids learning.

There are outstanding projects being actively developed in Python. Projects such as the following to name a random four:

When you move on from being a learner you can still stay with Python for those advanced tasks.

Pro
Has many libraries for scientific computing, data mining and machine learning

Python is commonly used in data science and has many libraries for scientific computing, such as numpy, pandas, matplotlib, etc.

Python has an active and helpful community, such as the comp.lang.python Google Groups, StackOverflow, reddit, etc.

Python's syntax supports optional type annotations for use with a third-party static type checker, which can catch a certain class of bugs at compile time. This also makes it easier for beginners to gradually transition to statically typed languages instead of wrestling with the compiler from the start.

It's very simple for understanding how programming works.

Python's built-in support and syntax for common collections such as lists, dictionaries, and sets, as well as supporting features like list comprehensions, foreach loops, map, filter, and others, makes their use much easier to get into for beginners. Python's support for Object Orient Programming, but with dynamic typing, also makes the topic of Data Structures much more accessible, as it takes the focus off of more tedious aspects, such as type casting and explicitly defined interfaces.

Python's convention of only hiding methods through prefacing them with underscores further takes the focus off of details such as Access Modifiers common in languages such as Java and C++, allowing beginners to focus on the core concepts, without much worry for language specific implementation details.

When learning Computer Science concepts such as algorithms and data structures, many texts use pseudo-code. Having a language such as Python whose syntax is very similar to pseudo-code is an obvious advantage that makes learning easier.

Pro
Can be used in many domains

Con
Not installed as default on most Linux distributions

While proper formatting is essential for any programmer, beginners often have trouble understanding the need and lack the discipline to do it. Add to that all those editors that randomly convert N spaces (usually 8) to tabs and you get an instant disaster. You may need to find yourself an editor/IDE you like and carry it with you on a thumb drive, which isn't a bad idea anyway.

Python, like many interpreted and untyped languages, is fairly slow compared to compiled languages like C, C++ or Java. Sometimes this won't matter, but when it does you're talking about twenty times slower than C/C++ and ten times slowed than Java. You need to have a plan for what you will do if it is too slow.

Although the principals of multi-threading in Python are good, the simplicity can be deceptive and multi-threaded applications are not always easy to create when multiple additional factors are accounted for. Multi-thread processes have to be explicitly created manually.

Con
Too opinionated for a general-purpose programming language

While it's a good language to learn and use after you have mastered a couple of other less rigid programming languages, it's definitely not good for first-time learners. Both the language itself and its community have made it quite clear that you should do everything the "Pythonic way" to get the best results, that it feels more like an opinionated framework instead of a general-purpose programming language, which means if you are a first-time learner and getting too "tuned" to the "Pythonic way" it will be much harder for you to learn other less-opinionated languages compared to the other way around. Like any programming languages and/or frameworks, I'd recommend first-time learners to learn less opinionated ones first to open up your mind, then learn some of the more opinionated ones to increase productivity for specific fields of works.

After all, programming languages are just some utilities for the human mind to interface with the computers, and there are more suitable tools for different tasks, and you should master the "Pythonic way" (after you already have adequate experience in computer programming) instead of locking your mind too close to the "Pythonic way" as a first-time learner.

Lots of features that will probably be crucial as time goes (good support for parallelism for example) are missing or are not that well-supported in Python. Since 2.x and 3.x still exist, be prepared to switch if something makes 3.x take off in the future.

Con
Does not teach you about data types

Since Python is a dynamically typed language, you don't have to learn about data types if you start using Python as your first language. Data types being one of the most important concepts in programming. This also will cause trouble in the long run when you will have to (inevitably) learn and work with a statically typed language because you will be forced to learn the type system from scratch.

Once you have you program the process of having a way to send it to others to use is fragile and fragmented. Python is still looking for the right solution for this with still differences in opinion. These differences are a huge counter to Python's mantra of "There should be one-- and preferably only one --obvious way to do it."

Con
It is best suited for scripting, but so are many other languages.

i.e. running js as a script in a node is trivial. Even languages that were not meant to run as a script are easy to use as a scripting language with just a .sh file.

You will be expected to rigidly stick to the coding practices and to do everything by-the-numbers. One of the most common complaints I heard from people who left Plone, which is Python based, to Drupal, which is PHP based, is the community is more like a frat house than a community. If you look for help, make sure you follow the rules of whatever type of group you are requesting help from.

While Python imports some very useful and elegant bits and pieces from FP (such as list comprehensions, higher-order functions such as map and filter), the language's support for FP falls short of the expectations raised by included features. For example, no tail call optimisation or proper lambdas. Referential transparency can be destroyed in unexpected ways even when it seems to be guaranteed. Function composition is not built into the core language. Etc.

Con
Abstraction to the point of hinderance

Python is abstracted far enough that if it's your first language, it will be harder to pick up lower level languages later versus going the other direction.

As the structure of Python code is based on conventions many developers are not following them and so it is difficult to follow/extract the design of not trivial application from the code. While this is a con, I see it in other languages as well. It seems to depend on the programmer. Most people don't learn conventions first, they just start programming. Unless you work for someone who insists you follow the conventions, you will probably go with what you like. You might never look at the conventions.

A large subset of the Python community still uses / relies upon Python 2, which is considered a legacy implementation by the Python authors. Some libraries still have varying degrees of support depending on which version of Python you use. There are syntactical differences between the versions.

The first impression given by well-chosen Python sample code is quite attractive. However, very soon a lack of unifying philosophy / theory behind the language starts to show more and more. This includes issues with OOP such as lack of consistency in the use of object methods vs. functions (e.g., is it x.sort() or sorted(x), or both for lists?), made worse by too many functions in global name space. Method names via mangling and the init(self) look and feel like features just bolted on an existing simpler language.

Con
Not good for mobile development

You can use frameworks like Kivy, but if your ultimate goal is to write mobile apps Python may not be the best first choice.

Have a question about Python? Leave a comment for Yves, Tim and 27 other contributors.
See Product Page for "Python"