4
User
Recs.
23
Updates
3 yrs
Last
Updated
Here’s the Deal
Slant is powered by a community that helps you make informed decisions. Tell us what you’re passionate about to get your personalized feed and help others.
Related Questions
Activity
71 Options 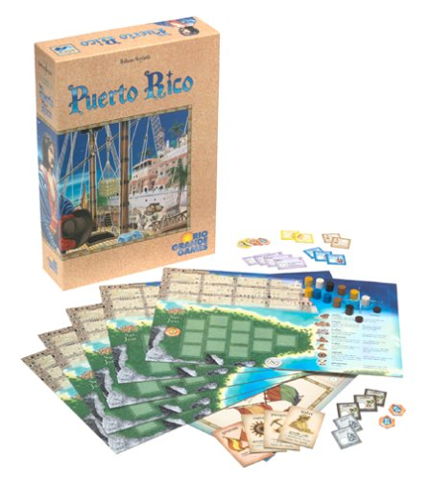 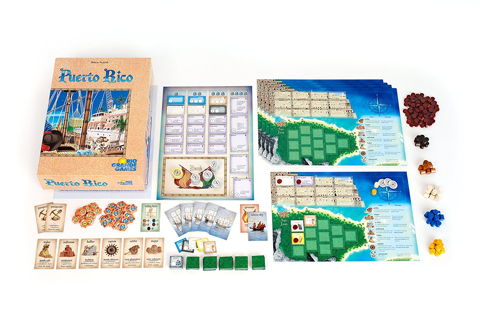 Puerto Rico is a role selection, strategy board game. Players take turns taking on various governor roles on the island of Puerto Rico as they build buildings, ship goods, and trade to gain points. The player with the most victory points at the end of the game is the winner.

Pro
Simple to learn, but plenty of strategy

The basic game flow of choosing Governor roles each round is easy to grasp, but in its simplicity, it offers much depth. Sometimes choosing between a role which will benefit you at the moment versus a role with the bonus money can make you pause and plan ahead. Perhaps you might even consider taking a role that you know your opponent wants, just to prevent them from getting ahead. This constant analyzing allows for plenty of strategy to take hold even if the game play itself is rather simplistic.

Building new buildings, trading goods, and taking control of the shipping market can offer some intense gameplay. Deciding what role to take each turn for maximum benefit can be exciting - there is a limited supply of everything. Goods take time to produce and there is only limited ships for use in exporting them. If someone else takes the role you wanted that turn and ruins your shipping or trading plans, you'll have to adjust your strategy on the fly. This can result in some pretty exciting gameplay where you're always thinking of multiple paths to victory.

Pro
Each round you'll get to try something new

On each round, players go around the table and choose among seven Governor roles such as builder, captain, trader, and more.

Each role has its own special ability and benefit - for example, builders can erect buildings with money and captains can ship goods. At the end of each round, there will always be three or more roles which were not chosen. These roles are given bonus money for the next round in order to encourage players to choose them on the next round. It's a simple mechanic, but being able to try a new role every round ensures you'll have plenty of ways to play out each round.

Additionally, there is a Governor token that is passed to a new player every turn. This token allows you to choose all roles on the round you're in possession of the token. This has to the potential to be a very fun and lucrative turn.

There are several aspects of balance that make the game play out incredibly smooth.

First of all, each role can only be selected by one player per round. No two players can choose Captain on the same round, for example. This means no one player can ever dominate a role since it's likely they won't get to choose that role during the next round. The addition of the tempting bonus money to unused roles from the previous round pretty much means all roles will get used eventually.

Secondly, when you go to ship your goods if you choose the trader role, each ship can only hold one type of good. So if you are focusing on sugar exportation, you won't have to worry about your opponent who is farming something else hogging all the ships.

Lastly, while players go around the table and roles are executed in order, their benefits do not take place until after the round is over. This means even if someone acted before you that round, he or she will not necessarily have the advantage.

Pro
Easy to teach your friends to play

While there are intricacies and strategies that are learned over time, the basic premise and simple rules are very easy to teach. Getting your friends into the game is quick and easy, even if they've never played before.

Pro
Tense thanks to a hidden scoring system

Score chips are placed face down on the table and are worth 1 or 5 points. Only you will know your own score. Even if you know how many chips your opponent has, you won't be able to tell their point total since the chips are worth variable points. This keeps things tense from start to finish.

Pro
Everyone can participate

Time wise, the game never feels dominated by a single player. Everyone gets to choose a role for their turn and there's never any scenario or situation where a player is left out or forced to sit out a round. This makes it a great game for any group or get together.

Con
Takes a long time to set up

It takes longer than the average board game to set up. This is compounded by the fact that each player has their own board. When playing with multiple new players, helping each one set up their board for the first time can be quite a time sink.

Con
Not a lot of visual appeal

The board colors are washed out and very bland. Buildings and other resources are simply cards with text. It's definitely not an exciting game to look at, and that may make some people hesitant to want to play.

You will need a minimum of three people to play, however even with this number, the game might feel slower than intended due to all the unused roles every round. The game is played best with 4-5 players so that more roles are filled and the game can speed along.

Con
It's hard to catch up if you fall behind

Have a question about Puerto Rico? Leave a comment for gilch, Yoshiyuki and 6 other contributors.
See Product Page for "Puerto Rico"