What are the best cross-platform & encrypted messaging apps?

+143
124
User
Recs.
80
Updates
7 days
Last
Updated
Here’s the Deal
Slant is powered by a community that helps you make informed decisions. Tell us what you’re passionate about to get your personalized feed and help others.
Related Questions
Activity
28 Options 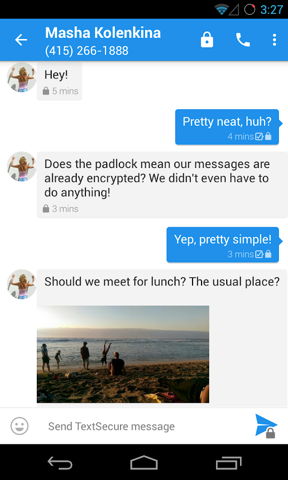 From The Open Whisper Systems team.

Unlike many other apps, signal provides not only text messaging but also live encrypted voice calling.

Signal uses an advanced end to end encryption protocol that provides privacy for every message every time.

Pro
Free as in both free beer and freedom, not as in "The customer is the product"

Pay nothing - The development team is supported by community donations and grants. There are no advertisements, and it doesn't cost anything to use.

Edward Snowden uses this messenger and recommends it to everyone who is concerned about his privacy.

Signal is free and open source software, enabling anyone to verify its security by auditing the code. It's the only private messenger that uses open source, peer-reviewed cryptographic protocols to keep your messages safe.

Signal Desktop is a Chrome extension that allows you to mirror messages from your phone, including replying.

Signal can be your default SMS/MMS text messenger. Encryption is not possible when sending SMS to your contacts, however.

Pro
You can easily view all media exchanged

You can easily view all media shared in the chat without scrolling back to when it was shared.

Pro
Note to Self feature

Allows you to "send: messages to yourself and sync to desktop so you can use Signal as a kind of encrypted Pushbullet alternative.

Pro
Encrypted chats on both mobile and desktop

Pro
Works everywhere in every country

Unlike most messenger apps, Signal works reliably in all countries by securely circumventing internet censorship.

The sender credentials can be encrypted with the rest of the message, leaving only the recipient address readable by the Signal server. Even if Signal wanted they couldn't see who is talking with who by this mean.

Con
Needs access to your phone number and contacts to work

Signal's server architecture has been partially decentralized since December 2013, when it was announced that the messaging protocol that is used in Signal had successfully been integrated into the Android-based open-source operating system CyanogenMod. As of CyanogenMod 11.0, the client logic is contained in a system app called WhisperPush. According to Open Whisper Systems, "the Cyanogen team runs their own Signal messaging server for WhisperPush clients, which federates with Open Whisper Systems' Signal server, so that both clients can exchange messages with each-other seamlessly".

The WhisperPush source code is available under the GPLv3 license. In January 2016, however, the CyanogenMod team announced that they will be discontinuing WhisperPush on February 1, and recommended that its users switch to Signal. After this, Signal's server architecture will be entirely centralized.

Sometimes messages won't be received if the Signal app has been closed for a long time or hasn't been opened after booting the device.

For those using Join, Pushbullet, or similar apps to send and receive SMS/MMS from web or desktop, putting your SMS in Signal somehow breaks this functionally. The dev is aware but plans to remedy the situation have not been named a priority.

Signal can only be registered to one mobile device at a time. But you can link Signal to Signal Desktop.

Con
Servers hosted in the US

A security risk due to National Security letters, which require giving up data to the US state, and making it illegal to disclose that.

Signal relies on Google services for push notifications so although it is encrypted and open source it needs proprietary component to work. That means you can't use Signal on some custom Android ROM (preferably rooted for full control) without Google apps installed.

Con
Account and messages are lost when you lose your phone

Basically only iOS/Android with a phone number lock. No true desktop clients, no WP/Symbian/BB, no multi-login.

Con
Code being used in Whatsapp and other parties undermines trust

It's unlikely FB would add encryption it does not have access to.

Con
Hostile against incorporating forks into the network

TangoDeltaDelta
Contributor for 5 years
5
Total
Recs.
310
Total
Karma
Signal
Recommended 4 years ago
Tried Telegram, but I trust Signal more. I also like the voice option. One downside is it only works on phone and PC, but not on a WiFi tablet (without a SIM card.).
Pro
Truly open and secure, comes from the Open Whisper Systems Team
Pro
Free as in both free beer and freedom, not as in "The customer is the product"
Pro
Encrypted voice calling
See full

SpontaneousNyamiNyami
Contributor for a year
1
Total
Recs.
125
Total
Karma
Signal
Recommended a year ago
Signal Is great. does not exist a perfect app and perfect privacy unfortunately. But I believe Signal could be the best in the world. I love telegram too, But The security protocol of Telegram has never been tested by independent experts. Telegram Is NOt open source. Signal Yes. The only Thing i suggest to...
Pro
Truly open and secure, comes from the Open Whisper Systems Team
Pro
Free as in both free beer and freedom, not as in "The customer is the product"
Pro
Encrypted voice calling
Con
Centralized architecture
Con
Requires phone number to register
Pro
Provides security and privacy
Pro
Free and open source
Pro
Supports (small sized) encrypted group chats
Con
Needs access to your phone number and contacts to work
Pro
SMS/MMS support
Pro
Supports sharing of various different media types
Pro
Message mirroring on Signal Desktop
Pro
Supports and shows Signal texts and SMS texts in same APP!
Pro
Linux CLI available
Pro
Recommended by Edward Snowden
Pro
You can easily view all media exchanged
Pro
Note to Self feature
Con
Servers hosted in the US
Pro
Encrypted chats on both mobile and desktop
Pro
Supports encrypted group chats
Pro
Works everywhere in every country
See full

Have a question about Signal? Leave a comment for Travis, Garrett and 152 other contributors.

Con
All the Cons Lists

I don't recommend because of ALL the CONS listed!