3
User
Recs.
9
Updates
3 yrs
Last
Updated
Here’s the Deal
Slant is powered by a community that helps you make informed decisions. Tell us what you’re passionate about to get your personalized feed and help others.
Related Questions
Activity
23 Options

0 Recommendations
See Product Page for "Pandemic: The Board Game"

--
Pandemic: The Board Game 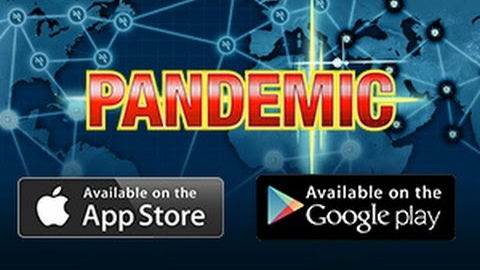 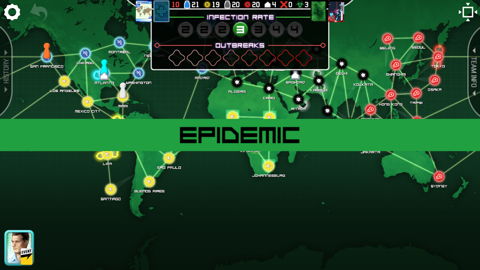 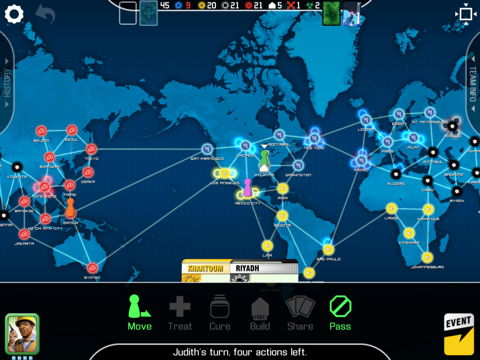 Pandemic is a co-op board game where the players take on the role of workers for the CDC (Center for Disease Control) racing to cure four diseases spreading around the world before they spread out of control and overtake the world. Players work together to treat disease hotspots and research cures.

Each player will choose from among 20 different roles, such as Pilots or Scientists, with varying bonuses. Some roles allow diseases to be cured faster while others allow for faster travel between cities.

On each turn, each player can take up to four actions including travel, treating the sick, discovering a cure, or setting up a research station. Cards represent each of these abilities, but when drawing a card there is a chance to get an "Epidemic" card that accelerates the rate at which the diseases spread.

If any disease gets out of control, all players lose. Players win the game when all four diseases are cured.

Pro
Easy to learn but still provides a challenge

Learning the rules doesn't take long at all, and within a few rounds, most players will be able to pick up what's going on. Even though the general game flow and rules are quick to understand, there is still plenty of nuances to gameplay, little tricks you'll be learning along the way, and plenty of different roles to choose from which allow room for in-depth strategies.

Pro
Lots of replayability thanks to each playthrough being unique

With multiple player roles (Pilot, Scientist, Doctor, etc) to choose from and the card draw that infects areas at random, each playthrough is an entirely different experience. Pandemic also has multiple expansions adding more player roles and even a traitor mechanic which can turn the game from fully co-op to 1 vs many, adding an additional challenge for the good guys to overcome.

Pro
One of the first games to implement full co-op gameplay, Pandemic remains one of the defining examples of the genre

When it was first released, Pandemic's co-op gameplay was a pretty unique aspect to boardgames and made for a different and fun experience where either all players won or lost as a team. As the board gaming hobby has grown over the years, fully co-operative games have become an entire genre, and yet Pandemic remains one of the defining examples of the style. With a base game that is consistently difficult--even for veteran players--and an engaging and interesting theme to draw players in, this is a game where working together to achieve victory is almost an art form.

Pro
Creates a sense of urgency thanks to the Infection Deck

One of Pandemic's greatest mechanisms is the way the Infection Deck is managed. Each turn players reveal a number of city cards from this deck equal to the current infection level (2-4), this determines where new infections will appear. Players also draw 2 cards each turn from the Player Deck, which has a variable number of Epidemic Cards mixed in based on the difficulty level.

The brilliance of the infection deck is how it interacts with Epidemic cards; when one is drawn from the player deck the Infection Deck's discard pile is shuffled, and then placed on top of the current Infection Deck, making it more likely that cities that have previously had outbreaks will have them again.

This creates a very real sense of urgency as the first draw after an Epidemic Card can often result in outbreaks and a rapidly accelerating spread of diseases.

Pandemic is a pretty difficult game, there will be a lot of losses compared to wins. Though when there is a win it does feel righteously earned.

Everyone works together in Pandemic, so there is no dominating or crushing your opponents in this game. This may not appeal to some competitive gamers who would prefer to play games that allow them to best other players.

Due to the nature of co-op games like Pandemic, a strong willed or loud player can end up dictating everyone else's turns for them, especially in situations where there are clearly better decisions to be made. This can lead some people to feel like they aren't actually 'playing' so much as being told what to do.

Rūdis
Contributor for 5 years
130
Total
Recs.
41K
Total
Karma
Pandemic: The Board Game
Recommended 4 years ago
Pro
Creates a sense of urgency thanks to the Infection Deck
Pro
One of the first games to implement full co-op gameplay, Pandemic remains one of the defining examples of the genre
Pro
Lots of replayability thanks to each playthrough being unique
Pro
Easy to learn but still provides a challenge
Con
Can suffer from Alpha-gamer / quarterbacking issues
Con
Won't appeal to competitive PvP players
Con
Difficult
See full
No highlighted recommendations.