What are the best Wii U first party games?

0
User
Recs.
4
Updates
10 mons
Last
Updated
Here’s the Deal
Slant is powered by a community that helps you make informed decisions. Tell us what you’re passionate about to get your personalized feed and help others.
Related Questions
Activity
13 Options

0 Recommendations
See Product Page for "The Legend of Zelda: Breath of the Wild"

--
The Legend of Zelda: Breath of the Wild 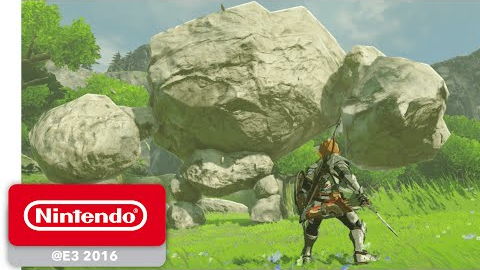 There's a vast array of puzzles found in Breath of the Wild where you use your abilities to move, manipulate or destroy the environment. It can be very simple like destroying rocks with a bomb to unblock a cave entrance. Or it can be fairly complex, requiring you to rotate and connect massive platforms, move stone orbs through an area filled with obstacles, and create pillars of ice on a waterfall to cross a bottomless pit. Regardless of the type of puzzle you encounter, they motivate you to think creatively, making it a delight when you arrive at the solution, especially because there's always a treasure waiting at the end.

Most open world games follow the same pattern - they give you a map that's full of blips, forcefully guiding you to marked locations, causing you to ignore everything along the way. Breath of the Wild steps away from this design choice by having a map where only you can mark points of interest. It's up to you to survey the land from high vantage points, choose a direction of heading, and find interesting locations. As a result, exploring and paying attention to the world actually matters, making it a really enjoyable and refreshing experience.

Con
Weapon durability system can feel tedious to some

When you attack enemies, your equipped weapon quickly loses its durability, breaking when it reaches zero. This can force you to switch to new weapons multiple times during a battle, adding a micromanagement aspect that can disrupt the flow of combat. You're not just fighting enemies, you're also fighting the flimsiness of your arsenal.

On top of that, most weapons can't be repaired either. This can diminish the joy of finding new weapons, since that cool sword you just found will be gone thirty minutes of gameplay later.

ToughNona
Contributor for a year
1
Total
Recs.
0
Total
Karma
The Legend of Zelda: Breath of the Wild
a year ago
ToughNona hasn’t added their experience, pros or cons to their recommendation.
See full
Currently displaying 0 out of 2 total recommendations.