2
User
Recs.
15
Updates
6 yrs
Last
Updated
Here’s the Deal
Slant is powered by a community that helps you make informed decisions. Tell us what you’re passionate about to get your personalized feed and help others.
Related Questions
Activity
6 Options 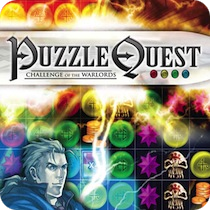 The core of Puzzle Quest comes down to its combat. You make a move, then your opponent gets a move. If someone runs out of life, they lose. If you matched four gems or more in a row by the time your turn ends, you get a second turn.
Gems have different colors. Matching gems of a color gives you that color mana, and instead of making a match, you can choose to cast a spell, which costs certain kinds of mana. Not too complicated.

Until you realize that your opponent is wearing an item that makes him regenerate life when his yellow mana is full. So you decide to steal all of the yellow mana on the board to fuel one of your yellow-colored spells and to prevent him from regenerating life. He casts a spell that siphons your yellow mana and gives it to him. You both go back and forth, retaliating against the other's strategy, until only one person is left.

The game is limited by your ability to play it. Not only does your chosen class dramatically effect your playstyle in the game, but so does your gear, often times changing how you play your character entirely.

The game supports PvP, where fighting an opponent who is just as smart as you can be challenging due to the great balance of play in multiplayer for evenly matched players. What is even better is that there are optional handicaps for matches between players that have different skill levels.

There are many instances that see the player questioning the insurmountable luck the AI often receives as it will skip obvious moves that any person would play that end up resulting in a match 4 extra turn when more tiles fall down, as if it knew that would happen. Sadly this can happen often and is how the game increases difficulty.

Have a question about Puzzle Quest? Leave a comment for thermoplastics, Slimothy and 1 other contributor.
See Product Page for "Puzzle Quest"