1
User
Recs.
22
Updates
6 yrs
Last
Updated
Here’s the Deal
Slant is powered by a community that helps you make informed decisions. Tell us what you’re passionate about to get your personalized feed and help others.
Related Questions
Activity
24 Options 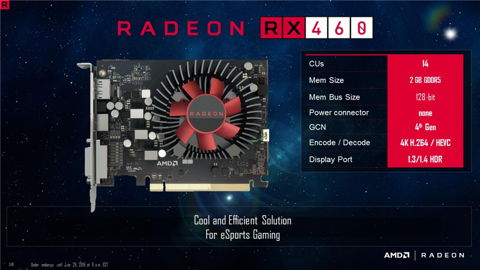 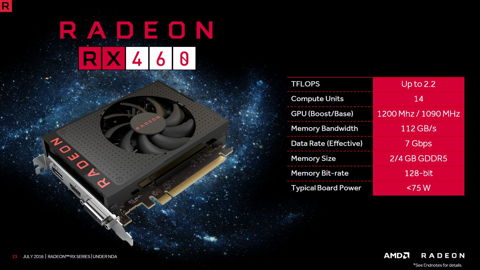 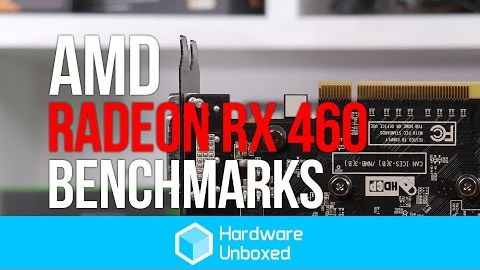 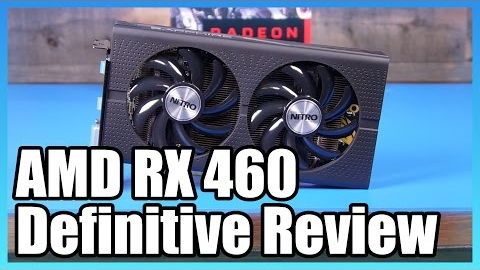 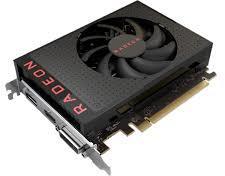 The AMD Radeon RX 460 chip was presented during the E3 PC Gaming Show 2016 and is positioned in the lower-end to mid range market. The RX 460 is based on the Polaris 10 architecture. The graphics card has DVI, HDMI and DisplayPort connections.

The RX 460 offers a very decent performance in recent video games with a 1080p resolution, although the card may struggle with maximum settings. Anno 2205 manages to squeeze an average framerate of 45 fps out of the RX 460 in 1080p and medium graphical settings. Similar results can be seen for Far Cry Primal at 49 fps and 47 frames per second for The Witcher 3. In Grand Theft Auto V, the RX 460 manages to achieve an average framerate of 100 fps.

In short, the AMD Radeon RX 460 is perfectly capable of playing games at a 1080p resolution, albeit not on high or ultra settings.

The 2 GB version of the RX 460 retails for a bit over $100, which is an extremely competitive price tag in the entry-level segment. Performance-wise, the RX 460 is a bit faster than a 750 Ti but costs about $30 less.

The RX 470 offers concurrent/parallel CPU to GPU communication in DirectX 12, Mantle and Vulkan with asynchronous shaders for the stream processors. Asynchronous shaders allow the developers of games to maximize the potential of AMD's new Polaris architecture and this technology is used to optimize DX12, Mantle and Vulkan performance in recently released compatible games. In short, developers can now use multiple task queues and split up GPU power across multiple tasks at the same time.

The RX 460 is currently the cheapest graphics card on the market with support for H.265/HEVC decoding (and thus Ultra HD resolutions with a high 10-bit color spectrum) and a HDMI 2.0 port. Next to gaming, this makes the RX 460 very suitable for playing Ultra HD video content.

Vulkan is a graphical API that allows developers to better communicate with the GPU, which generally results in performance improvements compared to the more standard DirectX 12 or OpenGL API's. Some recent games offer support for Vulkan, such as Doom, Dota 2 and Ashes of the Singularity.

The RX 460 is considered to be a low-end graphics card and doesn't perform noticeably better in Vulkan. In Doom with Ultra Settings and 1080p resolution, the RX 460 is able to achieve an average framerate of 33 FPS, with a minimum of 19 and a maximum of 76. When using Vulkan in the exact same situation, the RX 460 has an average framerate of 35 fps which is an improvement that not noticeable in-game, and a lower minimum of 10.5 fps and a higher maximum of 174 frames per second. This very small difference is quite surprising, as the stronger RX 470 and RX 480 siblings of the RX 460 do perform significantly better under Vulkan.

The AMD RX 460 is available in both a 2 GB and 4 GB version, but the latter version adds little value to this graphics card. Despite doubling the available video memory, performance differences in games at a 1080p resolution are very minimal. Compared to the 2 GB version, RX 460 cards with 4 gigabytes of memory retail for about $40 more and have a slightly higher power consumption due to the extra memory chips as well.

The RX 460 uses AMD's new Polaris 11 architecture and while this new generation of chips is more energy-efficient than previous-generation GPU's, the overall performance-per-watt ratio disappoints. The TDP (thermal design point and maximum power consumption) of the RX 460 is measured at 75 watts. In terms of gaming performance, the RX 460 offers similar results to the previous-generation R7 370 chip but unfortunately, power consumption is roughly the same.