What are the best podcast apps for iOS?

+28
29
User
Recs.
66
Updates
4 days
Last
Updated
Here’s the Deal
Slant is powered by a community that helps you make informed decisions. Tell us what you’re passionate about to get your personalized feed and help others.
Related Questions
Activity
20 Options 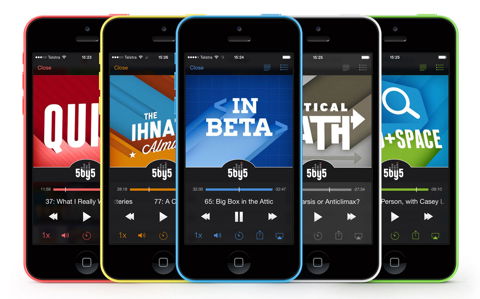 Pocket Casts [$5.99] is a very automated podcast app with lots of features, like sleep timer and auto download.

You can set a 'start from' position for a podcast to skip a set number of seconds from the beginning of an episode. Great for when you don't want to listen to an intro you've heard a couple of dozen times before.

Additionally, you can also change the playback speed, to slow down fast talkers or speed up slow talkers.

You can set Pocket Casts to automatically download the latest episode of a podcast, whenever a new episode is released.

The most pleasing User Experience (UX) to set a Sleep Timer.
Activating the sleep timer will stop the podcast after a set period of time or at the End of the Episode.

Pocket Casts has one of the most colorful, pleasant to use interfaces.

For example, the app takes the most prominent color from the album art and colorizes the rest of the playback interface based on that color. This allows the app to stay vibrant and slightly different for each podcast.

Or the way it displays featured podcasts in a colorful mosaic made from album art, makes the whole experience of using the app pleasant.

You can also customize the appearance of the playlist with a color and an icon to help it stand out easier.

Enables you to set a "global" playback speed to use for all podcasts which can be over-ridden by a podcast specific playback speed.

Pro
Can set custom skip-forward and back timing

You can set custom "skip forward" and "skip backward" timings for easily skipping past parts of podcasts you don't like.

If you use Pocket Casts on more than one device, you can synchronize settings, playback positions, etc., across all your devices.

Clicking the plus button in the top-right corner will bring you to featured podcasts. From there you can access multiple ways of finding new things to listen to such as: top charts (that can be separated in audio and video), search (that allows searching both by name and feed URL), a list of podcast networks and different podcast categories.

They also have a great selection of podcasts to choose from. The team behind Pocket Casts work hard to maintain a reliable and high quality catalog so you can avoid out of date listings, problems with raw feeds, etc.

It is possible to connect Pocket Casts with Sonos, and play podcasts.

Con
Skip episode often does not work with CarPlay

The Skip Episode feature, to automatically mark an episode as listened to and finshed, often does not work in CarPlay mode. Instead, you have to push the "skip forward" button a lot. Good luck having a long enough stoplight for that!

Con
Does not work with paid podcasts Have a question about Pocket Casts? Leave a comment for QuantumCalzone, Izem and 37 other contributors.

When listening to a podcast you can swipe right to bring up all the shownotes with clickable links.

Pro
Queue up next podcasts

From the playback screen swipe to the right to access your podcast playlist. From there you can easily queue up your next podcast.