181 24
Review of fish powered by the Slant community.

friendly interactive shell = fish
fish is a smart and user-friendly command line
shell for macOS, Linux, and the rest of the family. 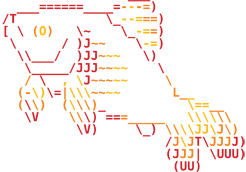 Pro
Already set up for you

While other shells require a lot of set up to act the way you want them to and to have some useful features, fish works perfectly out of the box. It has all the most widely used features baked in and are there out of the box without having the need to install plugins or tweak any configuration files.

fish suggests commands as you type, based on command history, completions, and valid file paths. As you type commands, you will see a completion offered after the cursor, in a muted gray color (which can be changed with the fish_color_autosuggestion variable). However, you can NEVER turn them off!

Because it needs very little configuration to work properly, you can use Fish everywhere. If you are working on a system you don't usually work, installing Fish from the repository is easy and will give you the same experience as the installation on your own machine without having to drag a dotfile around.

Fish has by far the best way to work with history, everything is automatically searchable. It works in the way you expect. No learning required.

It has a great tutorial. And the official documentation is clear, full of eloquent examples, and to the point.

You can define Universal variables, which are shared instantaneously through all running fish sessions and persists through shell restarts.

Pro
Pretty usable even without plugins

Everything you need from oh-my-zsh is available on default fish, don't need to install any plugins. And even better, fish is smaller than zsh.

Fish_update_completions parses manual pages installed on the system, and attempts to create completion files in the fish configuration directory.

When writing functions in an interactive shell, it will auto-indent as needed for if, for, function, etc.

Unlike bash, this won't return you string *.sh if no .sh files are found

Large test coverage, micro-second shell start, compatibility with plugins from other existing frameworks such as Tackle, Oh My Fish and Wahoo, cache system, offline index, the Fishery and other features.

Here is a sample. Notice that there are 2 files with spaces in names. ls produces a valid list, and for loop correctly iterated through its values.

sh scripts tend to be fragile when there are lists containing values with spaces.

The following, for example:

Will run the for loop, take all the stdout from it (both the fgrep and echo), and then pipe it through the final grep command.

Fish community maintains Oh My Fish, which is a shell framework inspired on Oh My Zsh awesome design and name. It offer a lot of beautiful prompt themes and awesome plugins, is lightweight, awesome and very simple to use.

Being POSIX-compliant may be essential to some, but it is not the be-all-and-end-all. Much of the trouble with POSIX-compliant shells is BECAUSE of POSIX, since it captures the poor behavior and syntax that existed. In most cases, POSIX-compliance is a fool's errand since there are significant differences between implementations of even the same shell (e.g., Bash, etc.) on various platforms.

in your .vimrc to solve the issue for vim.

Much of the functionality in Fish was not written with performance in mind. However, scripting in a shell is not supposed to be about performance. If you need it, use a full-blown programming environment to get it. Shells are for gluing the high-performance tools together.

Fish has no support for !!, but you can use Oh My Fish shell framework and install bang-bang plugin to have this shortcut in Fish shell. The downside of using bang-bang is that it takes over ones default key bindings, for those that don't use them it should not be an issue but for those that do it is an annoyance to be considered.

For sudo !!, this can also be achieved by making this custom function:

There is no included undo feature currently. But this seems to be a very minor nit.