What are the best single-board computers?

+3
10
User
Recs.
18
Updates
4 mons
Last
Updated
Here’s the Deal
Slant is powered by a community that helps you make informed decisions. Tell us what you’re passionate about to get your personalized feed and help others.
Related Questions
Activity
80 Options 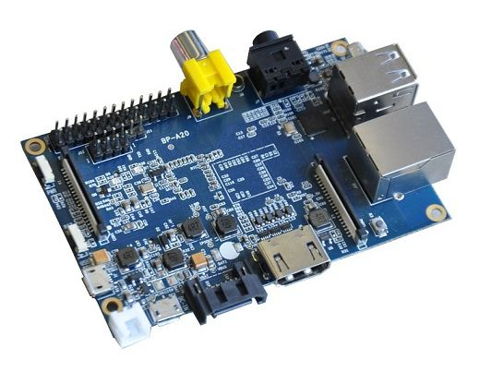 Banana Pi officially supports Fedora, Arch, Lubuntu and openSUSE. It also can be used with Raspbian (Debian derivative) or Android.

Other than having a port of Raspbian (the official OS for Raspberry Pi) available for use with full capabilities, Banana Pi can also use many applications that were originally written for Raspberry. One of these is WiringPi, a C/C++ library which gives easy access to Raspberry's I/O with a strong Arduino flavor. But that is just one example of the many open source projects being ported to Banana Pi.

The A20 is a weird SOC, it is almost unique in supporting a proper SATA interface. Add in the gigabit network and this little board takes a lot of beating.

Most models have an onboard Wi-Fi.

The A20 chip that the Banana Pi uses lacks a true Camera Serial Interface implementation, instead it uses a parallel camera interface. The problem with this is that there are no off-the-shelf camera modules that support this and can connect to the Banana Pi, but it should be mentioned that the makers of Banana Pi have promised to create a camera module that is supported by it.

There is bug somewhere write speed is limited to circa 40MB per second (IIRC), read can be circa 200MB. Not a biggie but as well to be aware. (This is all A20 silicon as far as I can tell)

Con
Does not fit most Raspberry Pi cases, even though it's where it clearly has gotten the inspiration from

The Banana Pi is pretty noticeable a Rapberry Pi lookalike and the name does not hide this information either. Unfortunately it's a bit larger than the Raspberry Pi, making it very hard to fit into most Raspberry Pi cases.

Have a question about Banana Pi? Leave a comment for Wernight, Alex and 12 other contributors.