What are the best Linux desktop environments for developers?

+81
70
User
Recs.
95
Updates
7 days
Last
Updated
Here’s the Deal
Slant is powered by a community that helps you make informed decisions. Tell us what you’re passionate about to get your personalized feed and help others.
Related Questions
Activity
22 Options 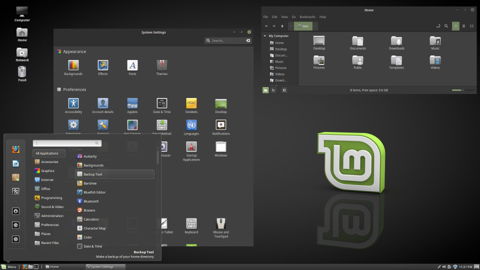 Cinnamon uses a traditional desktop userflow that most computer users are familiar with.

From little things like folder colors to larger options like desklets. Unlike gnome and unity, there is an option for almost any desktop preference.

Very easy to make this desktop your own both in terms of looks and functionality.

Cinnamon is one of the simplest of the Linux desktops to use. Everything appears to be at hand, and this is one of the easiest of the Linux desktop environments to get familiar with. It is, as has been pointed out, very customisable. The Mint install with Cinnamon seems to provide just about everything a user would want on their desktop system and it's easy to get at (mostly).

But, like anything Linux, if you want to do STUFF likely you will be at the command prompt (or terminal if you prefer).

Pro
Easy to relaunch if a crash occurs

No need to restart the computer. Just relaunch if there is a crash.

Your win+E, win+D, etc. are still working after migrated to Cinnamon from Windows.

Pro
Can run apps meant for any other desktop environment

Cinnamon can run any app meant for any other DE, meaning the user can have apps for XFCE and KDE simultaneously and they will run as smoothly as if they're being run in the corresponding DE.

Plenty of themes, ready and free to be downloaded and applied with just a couple of clicks in a few seconds, with the file sizes mostly around 0.5 - 1MB.

Pro
You can easily get it to look like a Mac

Cinnamon provides control of the placement of desktop icons on multiple monitor setups. This feature has been buggy, but in my testing of Linux Mint 19, this feature appeared to be stable. Thus, Cinnamon joins KDE and Windows in enabling this capability. For example, in a setup with 2 or 3 monitors, you can put the desktop icons on the right-hand monitor. With other DEs, the icons always move to the left-hand monitor.

Will look familiar to Windows users making the transition easier.

Pro
Actively developed with useful new features in each release

E.g. vertical panels are now there.

Has a great community and is very well supported through Linux Mint website.

Both Gnome and Cinnamon got the same looking configuration panel. There are 40 sub-panels in Linux Mint Cinnamon's, whenever there a far less with Ubuntu Gnome 3's.

Windows, notification, smart corners, windows overlay, connexion windows... you can have those in Gnome, but these require compiz and other stuff.

Is very easy to customize using the built-in theme and applet tools, It automatically installs themes and desktop/panel applets for you, so you mostly won't have to go search online for them.

Pro
You can easily get it to look like Windows

You can get it to closely look and behave like Windows with considerable ease. This is a good thing for those switching from Windows, because it gives them a familiar environment, cutting down on the learning curve a bit. Among the popular DE's this is the one that gets you closest with great ease.

Cinnamon is a modern desktop that has the latest features, but at the same time it sticks to its way as a classic desktop and ignores trends/hypes like client side decorations or popovermenus.

Pro
Update Manager is the best

It can sometimes freeze which is really annoying.

Main menu takes a lot of space and is cumbersome to navigate.

Cinnamon still lacks some useful choices for panel applets. For excellent management of panels and a rich choice of useful panel applets, I rely on Xfce.

Despite Cinnamon being on its stable second version it still crashes a lot, ranging from plugins all the way to drivers.

Rather than using actual GTK theming, Cinnamon appears to vye for its own strange infrastructure that isn't compatible across any other desktop.

Takes a lot of system resources.

Con
A lot of dependencies

You need to download a lot of packages to use it.

There is a limitation to how much you can customize it.

Tries to be too much like traditional Windows (XP, Vista, 7).

On Windows, for example, you can unplug a speaker and it will switch back to the laptop-speaker. In Cinnamon, you have to do it manually.

Nowadays, GTK is designed with GNOME, and only GNOME, in mind. Non-GNOME applications which attempt to utilize it suffer as a result.

RealisticCeto
Contributor for 3 years
1
Total
Recs.
0
Total
Karma
Cinnamon
Recommended 3 years ago
Cinnamon does not force things on me like Gnome does. I can make Cinnamon look and work like I work. I don't have to constantly work around the GUI.
Pro
Fast, elegant and stable interface
See full

ArticulateTenenet
Contributor for a year
1
Total
Recs.
0
Total
Karma
Cinnamon
a year ago
ArticulateTenenet hasn’t added their experience, pros or cons to their recommendation.
See full

Have a question about Cinnamon? Leave a comment for Richard, Trimalchio and 90 other contributors.

Pro
Most similar desktop to the windows experience

I went from Windows 10 to Linux Mint Cinnamon and so glad I have.

Linux Mint 17 is based on Ubuntu 14.04 LTS (Trusty), so the packages available are somewhat frozen in (a stable) place due to the LTS status.
If you want more recent versions of packages like available on Vivid and Wily you're out of luck.

There are no vertical panels in Cinnamon.