What is the best download manager for Mac OSX?

+138
133
User
Recs.
25
Updates
9 days
Last
Updated
Here’s the Deal
Slant is powered by a community that helps you make informed decisions. Tell us what you’re passionate about to get your personalized feed and help others.
Related Questions
Activity
11 Options 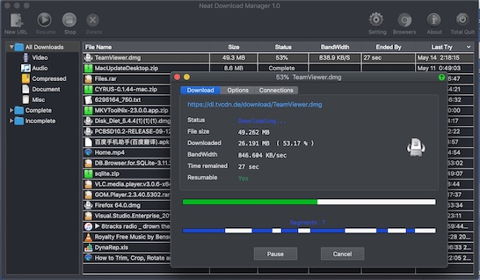 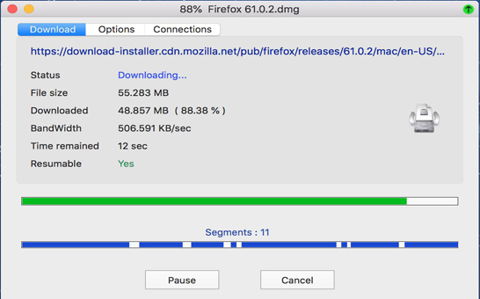 Downloads are quite fast due to the concurrent download technology and the fact that the program is compiled in C##.

And no, it won't create a default folder structure based on categories.

CourteousDievas
Contributor for a month
2
Total
Recs.
0
Total
Karma
Neat Download Manager for Mac
a month ago
CourteousDievas hasn’t added their experience, pros or cons to their recommendation.
See full

Have a question about Neat Download Manager for Mac? Leave a comment for adamlogan, Alex and 147 other contributors.

Neat Downloader does not allow users to change the directory where Downloads get downloaded to (default DL directory is ~/Downloads/), additionally, Neat Downloader creates folders for each type of filetype, including: video, audio, compressed, Document, Misc as the corresponding filetypes are downloaded. Not everyone will like having to deal with files nested in folders like this. (July 2 2019 update, the developer responded quickly by releasing a new version with the ability to turn off the creation of folders per filetype kind, but there is still no way to change the default download location yet, hopefully in the next release.) Another missing but basic expected functionality is the ability to set preferences on whether they want to be prompted on each DL where to save the file. Considering there is filtering in the app for different kinds of DLs based on file type, it seems a great oversight that one can't choose different DL locations per filetype. Upon further inspection of the website, it's obvious this software is in beta stage, so, a lot of (planned) features have yet to be implemented. This behavior can be worked around with Hazel, but still, these are really basic functions that are missing. The lack of flexibility to tell Neat Download Manager where we want DLs to go leaves a lot to be desired.