What are the best games where dialog choices heavily affects the gameplay?

4
User
Recs.
9
Updates
6 mons
Last
Updated
Here’s the Deal
Slant is powered by a community that helps you make informed decisions. Tell us what you’re passionate about to get your personalized feed and help others.
Related Questions
Activity
19 Options

Arcanum: Of Steamworks and Magick Obscura

The Age of Decadence 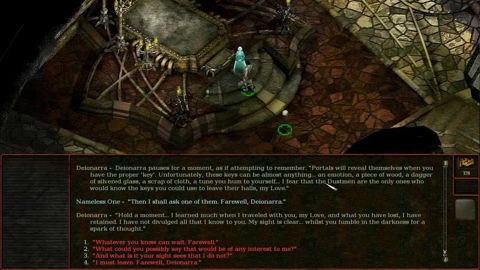 Planescape: Torment is a CRPG (Computer Role Playing Game) that focuses heavily on storyline and conversation over combat and strategy.

Pro
Dialogue choices that affect you without even touching lines of code, which affects how you play

Planetscape: Torment has a dark setting where zombies and scary creatures are the focus, making for a game that is themed to be more scary over a traditional fantasy game. So for those interested in a darker themed fantasy setting this should appeal to their interests.

inXile Entertainment said they were going to make a spiritual successor of Planescape: Torment called Torment: Tides of Numenera through kickstarter, it actually beat the record for hitting the $1 million mark at the time of the kickstarter which had a kickstarter goal of $900k that was planned for a month. The goal was hit in 6 hours. Total, Tides of Numenera has hit almost $5 million, more than 5 times than the original goal, and hit their goal in just six hours. This easy backing shows just how popular Planetscape: Torment was and still is.

Con
The game slows down after you leave the first dungeon

It also takes some exploring to find the next plot thread.

Unlike most CRPG games the fantasy setting is not very Tolkeinesque, there are no dwarves or elves to be seen. All of the traditional fantasy tropes will not be found here as the game focuses on a much darker setting with undead and other scarier creatures. This may not be intriguing to some and too dark a game for those that normally enjoy the CRPG genre.

IndependentApoLaki
Contributor for 4 years
1
Total
Recs.
30
Total
Karma
Planescape: Torment
Recommended 4 years ago
Waaay ahead of its time in this regard. Or is everything else after this game simply failing to live up to the bar that it set? You don't feel like you're watching some protagonist make these choices in the 3rd person -- you feel like you're making them yourself. The dialogue options in many i...
Pro
Dialogue choices that affect you without even touching lines of code, which affects how you play
Con
The game slows down after you leave the first dungeon
See full