722 155
Review of Emacs powered by the Slant community.

A robust text editor capable of achieving whatever it is the writer wishes. It supports a plethora of programming languages and other faculties of text editing. Yet its advantages do not stop there. If one wishes to delve into the wizardry of Emacs, they can use it for email, web browsing, organizing ones life and so much more. With all these factors pertaining to the sovereignty of Emacs, only one question remains. What is stopping you from beholding its power? 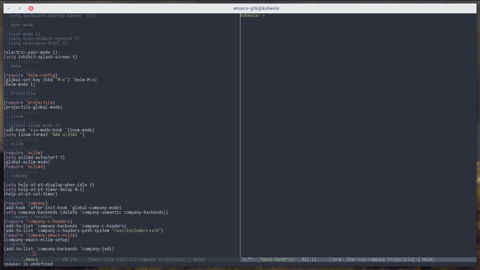 Emacs can be controlled entirely with the keyboard. While true, I often find the mouse and menus handy for those lesser-used commands. An aide-memoir.

Customizations can be made to a wide range of Emacs' functions through a Lisp dialect (Emacs Lisp). A robust list of existing Lisp extensions include the practical (git integration, syntax highlighting, etc) to the utilitarian (calculators, calendars) to the sublime (chess, Eliza).

Pro
It's also an IDE

You can debug, compile, manage files, integrate with version control systems, etc. All through the various plugins that can be installed.

Pro
Works in terminal or as a GUI application

You can use Emacs' command line interface or graphical user interface.

Emacs has extensive help support built-in as well as a tutorial accessed with C-h t.

With 30+ years of use the Emacs documentation is very thorough. There are also a lot of tutorials and guides written by third parties.

With lisp customization, any behavior of Emacs can be changed. Update with pre-release patch can be also applied without recompiling the whole Emacs.

Advanced planning and publication which can start as a simple list.

Fully compliant GNU-emacs is available on many platforms, and they all understand .emacs configuration files.

Through its programmability, a very broad range of functionalities can be integrated in emacs, turning it even into a "single point of contact" with the underlying operating system.

Works on Linux, Windows, Macintosh, BSD, and others.

You can pass complicated arguments in the mini buffer.

Pro
Has been widely used for a long time

Emacs is great for everything.

Evil is an extensible vi layer for Emacs. It provides Vim features like Visual selection and text objects.

You can jump straight from your org-mode files to programming tasks - and back - and build a seamless workflow.

Powerful commands, search, and more with the Helm plugin.

Since version 25 you can run GTK widgets inside Emacs buffers. One of these is the WebKitGTK+, which allows the user to run a full-featured web browser inside Emacs with JavaScript and CSS support among other things.

Pro
Excelent tutorial to get you started

The tutorial you are presented with at startup shows you exactly what you need to get started and teaches you how to use the built-in help yourself later.

Emacs has a number of shell variants: ansi-term, shell, and eshell.

Complex git history editing become a breeze with very few keystrokes. And simple ones are quickly stashed in muscle memory. Git becomes an direct extension of your brain thanks to Magit. Cherrypicking, blaming, resetting, interactive rebasing, line level commit, spinoff branches... you name it, magit already has it and has typically all those 5 to 10 git CLI commands of higher-level patterns also tide to one simple shortcut (want to amend a commit three commits away ? forgot to branch out and you've got already N commits on master ? ... etc... ).

Managing several large mailing lists has never been easier using Gnus. The threading commands and the various ways of scoring articles means that I never miss important messages/authors, etc. A joy to use.

You can use the underlying operating system shell as a terminal emulation in an Emacs buffer. Don't like the default shell for your configuration? You can change it to your liking.

Missing some neural package that predicts actions, maybe in the next release ...

Con
Sometimes the extensibility can distract you from your actual work

If I ever want to lose half a day, I'll start by tweaking my .spacemacs config file.

While it's better than it used to be, with most functions being possible through the menu, Emacs is still quite a bit different from your standard editor. You'll need to learn new keyboard shortcuts.

Con
Keyboard combinations can be confusing for new users

For example, for navigation it uses the b, n, p, l keys. Which for some people may seem strange in the begging. However they can be changed easily.

Con
Documentation is not beginner-friendly

Although lots of good built-in documentation _exists_, I have after four years of Emacs as my primary editor not figured out how to actually make use of it, and rely completely on Google / StackOverflow for help.

I was using Emacs in the early 1980's, before there were GUIs. In fairness to Emacs, its original design was conceived in that context and is rather good at some things, like flexible ability to bind commands to keyboard shortcuts. Unfortunately, it didn't keep up with the times and fails to take advantage of the entire world of GUI design that's revolutionized computer science since then. So Emacs does 5% or what an editor should do quite will, and is surprisingly under-powered and old fashioned at the other 95%. To this day, it lacks or struggles with very basic things, like interactive dialogs, toolbars, tabbed interface, file system navigation, etc., etc. The things I just mentioned, are all present in some limited and inept form, but falls far short of current standard of good user interface design. For this reason, I would not recommend Emacs to anyone who is under 50 year old, or who needs power user capabilities. For casual, unsophisticated applications by someone who grew up with green screen character based computers, it's probably OK.

The language that's used for user customization, extensions, and for much of the basic editor functionality, is Emacs lisp, or elisp for short. I actually like lisp in general, especially Scheme, but unfortunately, elisp is one of the worst versions of lisp ever created, barely meriting being called lisp. It's very slow, impoverished in features, inconsistent, and rather inelegant in design. Elisp needed to be overhauled 20 or 30 years ago, but the Emacs developers were not willing to do the work. I believe this is one of the major reasons Emacs is so buggy, lacking in features, development is so slow, and consequently almost nobody uses it (or should use it) anymore.

It's not clear to what extent Emacs is still supported. There's still some development taking place, but so slow that it's almost an abandoned project. There are numerous bugs in Emacs, many these days associated with start up and package management. When you search the Internet for solutions, you often find many posts, sometimes going back months or even years, with no clear fix.

For customization, you need to learn Lisp.

Con
A lot of jokes in this serious software

Con
Using Emacs on a new machine without your .emacs file