What are the best team-based games on Steam?

1
User
Recs.
13
Updates
5 yrs
Last
Updated
Here’s the Deal
Slant is powered by a community that helps you make informed decisions. Tell us what you’re passionate about to get your personalized feed and help others.
Related Questions
Activity
33 Options 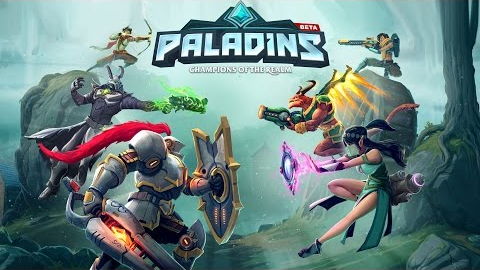 It's a first person shooter with an arena feel to it. There are several characters, and they all fit into 4 specific roles:
Front-liner - the tanks who are taking most of the damage an attention for your team.
Damage - Characters that have high, consistent damage output.
Support - High utility characters, which help both offense and defense.
Flank - Characters that are designed to circle around and take out key targets from behind.

It will be up to you to decide what play style suits you best, as you battle the enemy team to get that awesome victory screen.

Paladins isn't a very resource-heavy game, which means it can be enjoyed by pretty much everyone.

Pro
You can customize characters to fit your particular play style

Paladins has a system in place called "Card Mastery." Essentially, a player can spend their gold (or gems, if you choose to put money into it) on cards which will buff your character in specific ways in-game. These cards can radically change how characters are played, even allowing them to fit other roles in some situations.

There are also "Burn Cards," which allow the player to make themselves stronger or even counteract opponents' strategies. These are limited in used, but very powerful.

Every online game has some amount of toxicity, but Paladins has a relatively supportive community of players.

Everything that affects gameplay in Paladins can be unlocked simply by playing.However, there are cosmetic items available for purchase if you'd like to support the developers.

All champions in paladins are powerful and well balanced up to a point. Each character has their role in the games, and therefore, relies on tactics and champion picks in the game to win. If a champion, however, feels quite overpowered or weak, new patches will adjust him/her to a better choice for players.

Pro
An expansive roster of characters

Paladins currently has 22 characters available to play, and those span 4 different roles. It should also be noted that brand new players will start off with 7 characters and need to play to acquire gold in order to unlock new ones.

Pro
Fast-paced and full of action

Paladins is a fast-paced first person shooter. Games are over pretty quickly, and queue times are short, so you can make the most out of your play time.

With the recent patch, gold prices shot up on characters and cards, but the rewards you get for playing did not. Because of that, the gems you can buy with real money are simply the easiest option, even for people with a lot of play time.

Con
Characters are not well balanced

Characters range from being highly underpowered to wildly overpowered.

Cards like Cauterize and Wrecker completely nullify all tanks and healers halfway through the game, and it consistutes a battle of who gets the max first.

Paladins is not a perfect game due to its constant lags and bugs and has to heavily rely on new patches to fix them.

Have a question about Paladins? Leave a comment for Belle.
See Product Page for "Paladins"